Neo-Ultra™
The Next Generation of Neoprene Neo-Ultra vs. NeoSupreme vs. Neoprene

History - When was Neoprene Invented?

DuPont's scientists had invented Neoprene on the 17th of April 1930 and in 1931, when they tried to market the material compound, business opportunities were quite limited because of the strong foul smell. By 1935, a newer production method was established, which reduced the smell to some degree and increased production output. This made it more affordable as a manufacturing input, but it was and still is a foul smelling material.

Under the California sun, in the early 1950s, neoprene made the crossover from wetsuit diving material to seat cover driving material.

Most automotive materials in the 1950s were not waterproof. Many of the seating materials were metallic coloured woven fabrics with very little to no protection. If your seats got wet, they stayed wet until they were aired out and dried in the sun.
The idea was that, if Neoprene could be used for wetsuits, why couldn’t it be used for neoprene seat covers?

NEO-ULTRA™ Custom Fit Seat Covers Simply Outperform any other Neoprene Covers on the Market Today.
NEO-ULTRA™, the Next Generation of Neoprene, is now the best Neoprene seat cover material on the market.
NEO-ULTRA™ provides a great form-fitting cover that is waterproof, snag-free, odorless and cost-effective!

The honest truth is, if your kids and pets will be sitting or playing on top of the neoprene seat covers, you may want a safer alternative.

In 2009, Neoprene won the Allergen of the Year Award; because of the toxic off-gassing that releases dangerous chemicals into the air that your kids will breathe in. The Environmental Protection Agency (EPA) has listed Butadiene as a Toxic Pollutant, which is released as a gas when producing neoprene rubber.
CR & SBR Grade Rubber produce strong ugly smells of Rubber Off-Gassing and requires ventilation for about 1 week prior to installation.

If the toxicity of gasses being released in your vehicle isn’t enough to convince you of how unsafe neoprene is, then think about this;
One of the consistent complaints from divers is the foul Skunk-like smell when your body oils and sweat start to seep into the neoprene rubber.
It is not easy to eliminate those odours from the rubber in the neoprene.

Any application where people don’t have to breathe the dangerous fumes that are being leached out.
Examples would be industrial gaskets, weather stripping, window and door seals and vibration reduction pads for washers and dryers etc.

What happens if Neoprene burns?

What happens if neoprene ever catches fire, besides the obvious flammability concerns, it could also release dangerous Hydrogen Chloride into the air which can irritate the lungs and result in coughing or a shortness of breath. If a person continues to breathe it in, it can lead to fluid build-up in the lungs and possible respiratory complications. Hydrogen Chloride is highly reactive with water vapours. When it comes into contact with moisture in the air (water vapour), at room temperature it can react just like Hydrochloric Acid, so inhaling it can be very harmful to adults and children. If you encounter this type of situation, immediately leave the space for a well ventilated area.

Due to the price of neoprene and the potential health concerns, an alternative was developed; Neo-Supreme.
Basically Neo-Supreme does not contain any rubber and is much safer to interact with, but if you’re looking for protection against water or spills then Neo-Supreme may not be a smart choice either. Yes, Supreme is cheaper and not toxic, but it is not waterproof in any way.
When neosupreme is wet, it will stay wet and start to behave like a coffee filter. There is no protection against any moisture.

The name implies that it will protect like a neoprene, but it simply is one of the worst at repelling water off your seats. 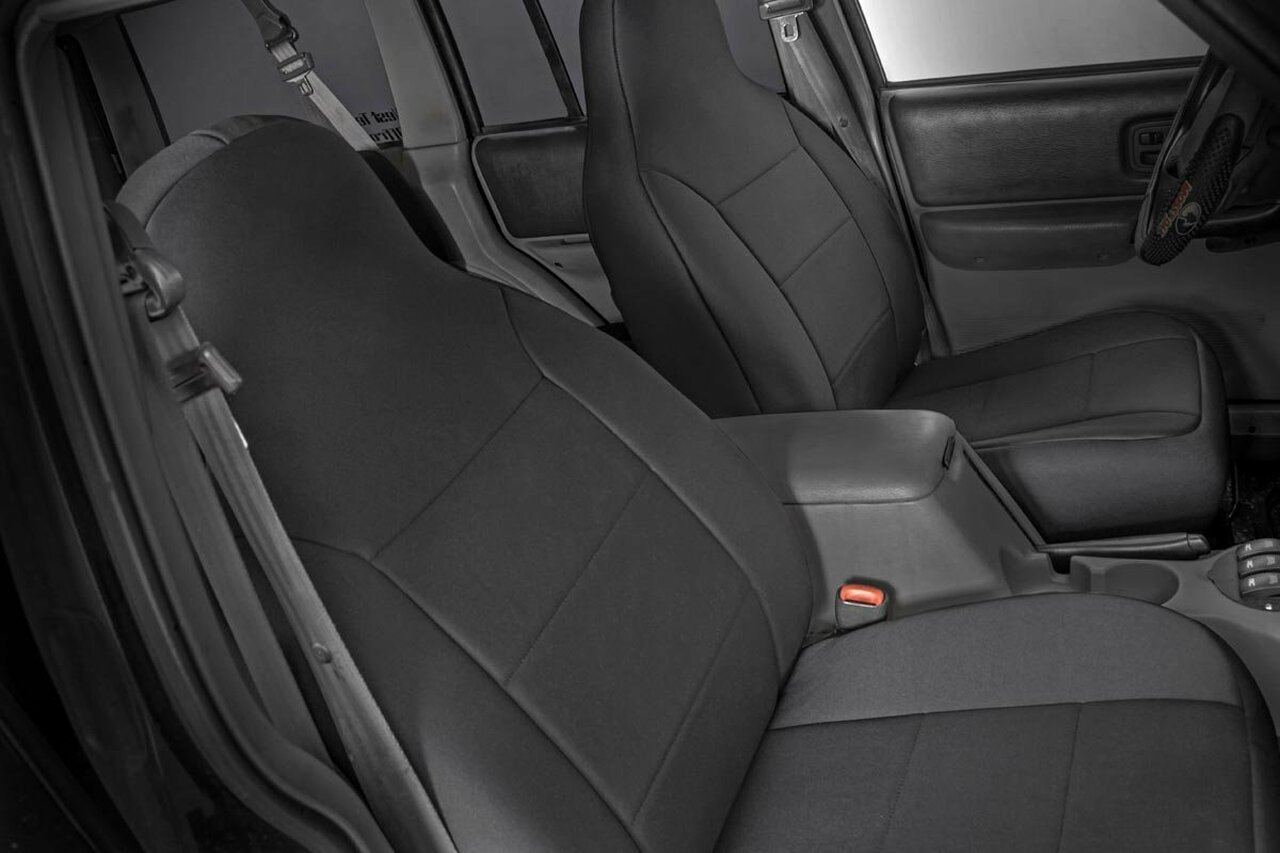 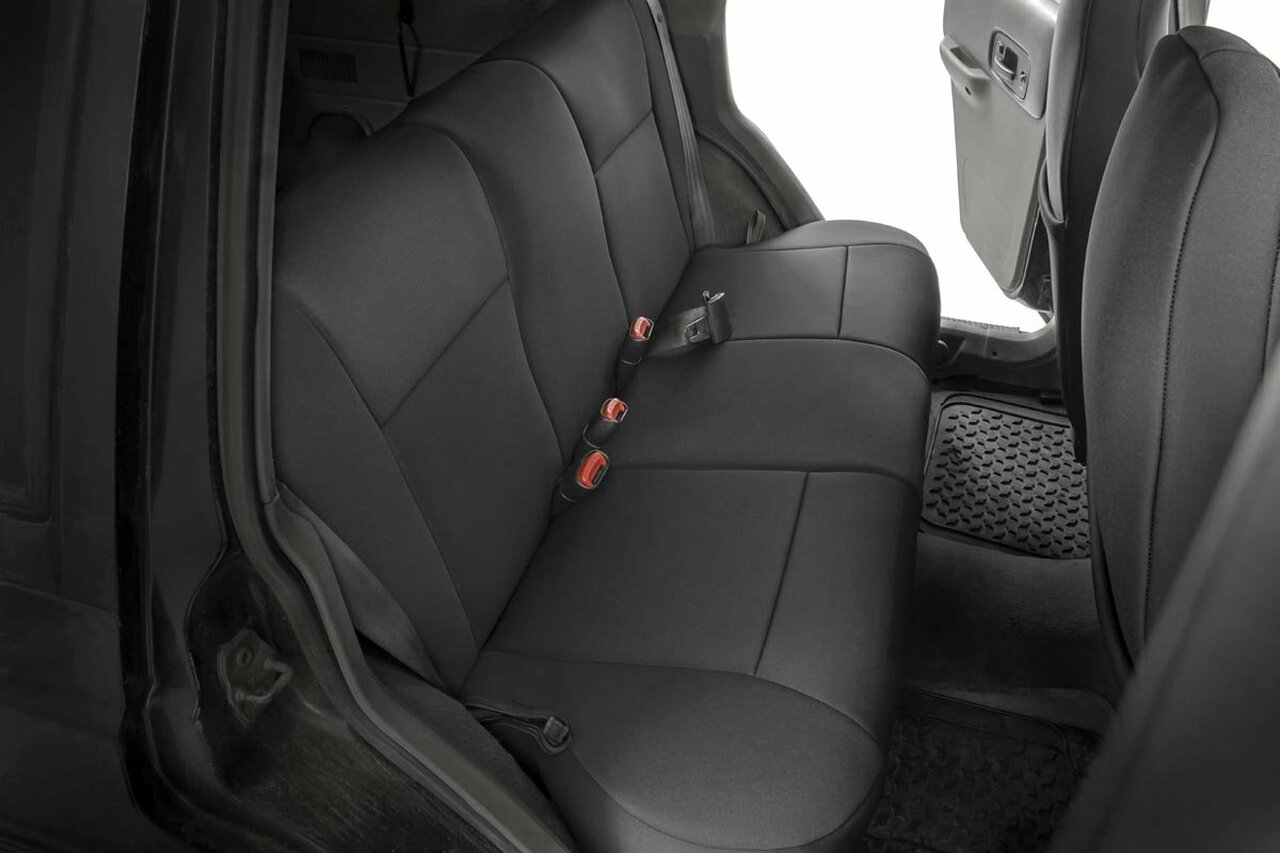 The Truth: Neo-Ultra vs. NeoSupreme vs. Neoprene

Neo-Ultra features Anti-Snag fabric is designed with a special blend of fibers that allow for greater forgiveness as people slide off of their seats. We also included a tight, evenly balanced weft and warp base with a slightly modified angular knit construction. This construction feature offers many benefits, especially for drivers who spend a lot of time in a vehicle, getting in and out on a fairly regular basis. The non-perpendicular knit pattern reacts favourably with the tension of sliding in and off of your seat; the integration of 20 degree angles within Neo-Ultra’s knit pattern, handles the stress on the fibers in a way that promotes a longer life for your seat covers.

Neoprene offers waterproof protection due to the neoprene rubber and how it is not water-soluble. It may or may not feature a DWR topcoat, but the rubber keeps the seats dry. The only problem is – neoprene rubber is not healthy, and it can do more harm than good. Would you choose this waterproof solution and all the smelly toxic baggage that comes with this material choice?

Not all NeoSupreme seat covers are water repellent. In fact, the only spill protection it might offer is a DWR coating. This is simply not good enough to keep you and your seats dry. We all know that a Durable Water Repellent (DWR) coating will eventually wear-off as the abrasion of sliding on and off your seats, slowly removes the water repellent coatings sprayed onto the top of the fabrics. When this happens, neosupreme will not effectively protect your seats from water or heavy moisture. It’s almost as effective as a filter for a drip coffee machine.

Odours and Off-Gassing: Neo-Ultra is virtually odourless. We’ve conducted a lot of smell tests and have detected no unpleasant odours. Neo-Ultra has a very neutral to nothing smell about it and no concerns about off-gassing and no toxic smells. Neo-Supreme is another material that will not turn you off because of strong odours. It contains no rubber and therefore no foul or strong smells that leave you with headaches.
The economy version of neoprene is neosupreme, but without the rubber smell and no waterproofing.

The smelly award goes to Neoprene:
It’s not just smelly, but the chemicals that are off-gassing and the fumes you and your family are breathing in. No matter how you want to say it, Neoprene stinks on so many levels, and it is an unhealthy choice.

UV Light Fade Resistance - Comparison
Not all materials resist sunlight fading in the same way.
Neoprene and direct sunlight do not mix well. If neoprene is left in direct sun, the heat and powerful UV Rays will start to break down the integrity of the material.

The top surface material for many brands of neoprene seat covers is nylon. There is a time and place for nylon, but neoprene is not one of them.

Nylon may have a higher strength to weight ratio, but it has a higher sheen, which makes it shinier. Nylon is a bit stretchier, but does not have the same abrasion resistance as polyester. Neosupreme falls into the same pile as neoprene; they both feature nylon top surface materials. As a result, you can expect your covers to fade faster if the top materials is nylon. Neo-Ultra incorporates Polyester to provide better abrasion and wear resistance and less sunlight fading.

By contrast, the Neoprene and NeoSupreme samples that were tested were both susceptible to material snags and pilling because of the symmetry of weft and warp yarns. The top surface materials will not wear as well as Neo-Ultra because almost all the competing brands seem to be using off-the-shelf standard materials. These materials don’t really take into consideration the type of performance a seat cover owner is expecting.

Example
If you wore a uniform with buttons, snaps or even Velcro closures, it would slowly start to break the individual yarns, and you’d notice the wear patterns on the fabric.
A typical Police Officer, Firefighter or Ambulance driver would have a uniform with back pockets where Velcro is often used for quick open and close situations.
This will accelerate the wear on a Neoprene or NeoSupreme seat cover, however Neo-Ultra was designed to withstand the potential of Velcro drag on the material.

Neo Ultra vs. Neoprene vs. Neo-Supreme. Who is Toughest? 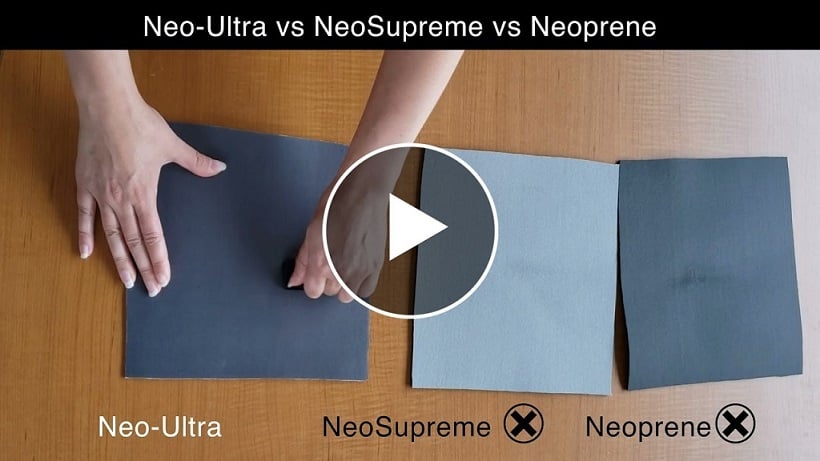 Neo-Ultra provides all the waterproof protection you need for both work and play! 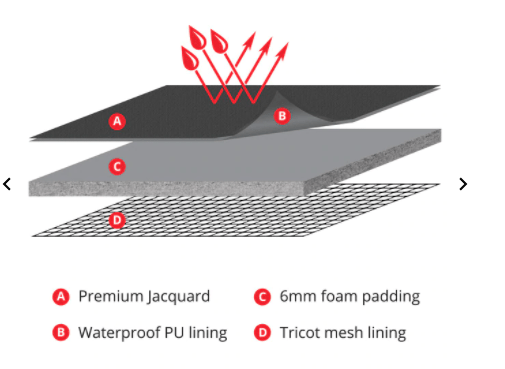 Neo-Ultra™ features a Waterproof Performance Barrier that is an Eco-Friendly alternative to the nasty toxic smell of rubber.
Shop Now